The Samsung Galaxy Note 10 and Galaxy Note 10+ share a lot of specifications, while the display, battery size, as well as the RAM and internal storage capacities on offer are different. The Galaxy Note 10 sports a 2280×1080 pixels 401ppi display while the one of the bigger Galaxy Note 10+ is a 498ppi 3040×1440 pixels resolution display. Both are Dynamic AMOLED panels with support for HDR10+ and dynamic tone mapping.

The Galaxy Note 10 will be available in a single 8GB RAM and 256GB storage LTE variant in international markets, with Samsung’s home market also getting a 5G variant, which will pack 12GB of RAM. There’s no microSD card slot on the Galaxy Note 10.

The Galaxy Note 10+ — which does have a microSD card with support for cards up to 1TB capacity — packs 12GB of RAM by default with a choice of 256GB and 512GB of built-in storage. Once again, there will be a 5G variant of the phone in South Korea.

As rumoured, there’s no headphone jack on the Galaxy Note 10 duo. Connectivity options include Wi-Fi 802.11ax with support for VHT80 MU-MIMO and 1024QAM, which enables theoretical upload and download speeds up to 1.2Gbps; LTE with up to 2Gbps download speeds (and 5G in Korea); Bluetooth v5; USB Type-C; NFC; and GPS, Galileo, Glonass, as well as BeiDou.

Samsung is using its brand-new octa-core Exynos 9825 SoC to power the Galaxy Note 10 and Galaxy Note 10+ in majority of the markets around the world, including India. However, in the US, the two phones will use Qualcomm Snapdragon 855 SoC, the same processor that is present in the company’s Galaxy S10 phones in the country.

Apart from this triple camera assembly, the Galaxy Note 10+ packs an additional sensor at the back, next to the flash. Samsung is calling this VGA sensor the “DepthVision” camera, and it will let you to take 3D scans of objects.

On the front, both the Samsung Galaxy Note 10 and Galaxy Note 10+ pack a 10-megapixel f/2.2 camera with autofocus and an 80 degree field-of-view.

Four live focus modes — Blur, Big Circle, Colour Point, and Glitch —let you apply effects to the background in your photos as well as videos and, as the name suggests, you can see them live even as you take the picture or record the video.

Arguably the most interesting camera-related feature is a new Zoom-in Mic that will let you tap any person in a recording and have their sound enhanced in the resulting video. This should — in theory, at least — let you focus on the sound of the lead singer, for example, if you are recording a musical performance at a crowded venue with a lot of background noise. 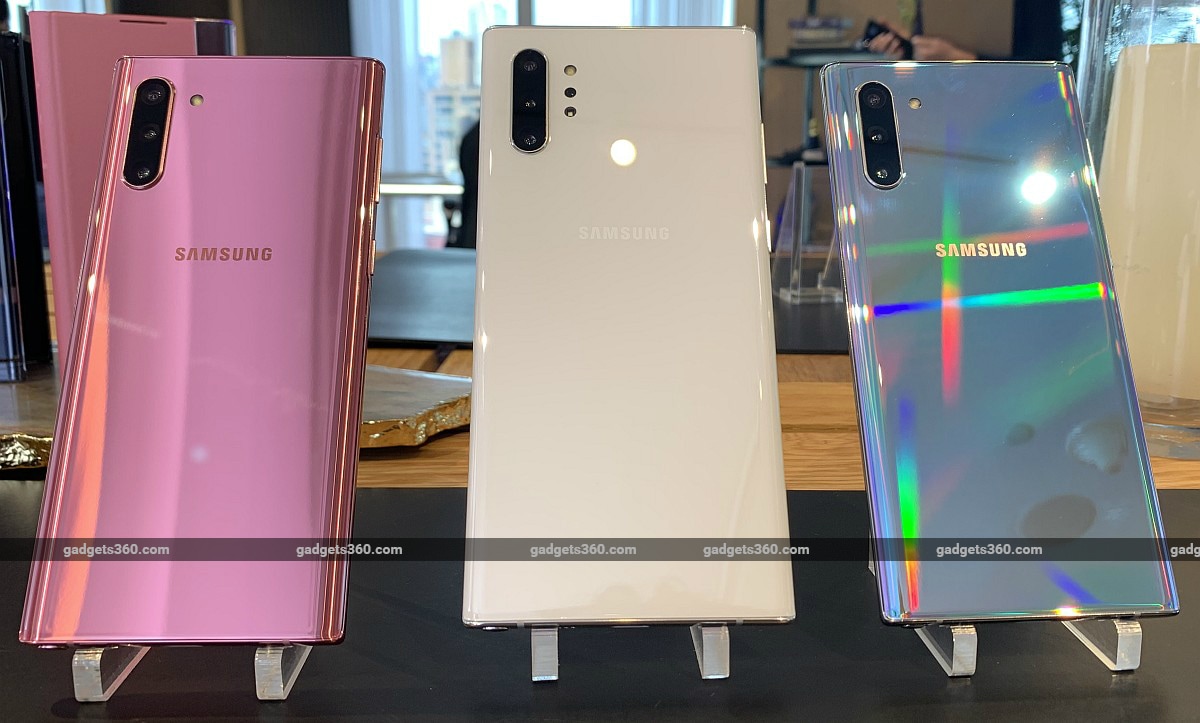 The Galaxy Note 10 and Galaxy Note 10+ also ship with a brand new video editor app, which lets you edit videos on-the-go. As you would expect, the app includes S Pen support, letting you doodle text on videos apart from using the stylus to make certain operations faster and more intuitive.

Talking about S Pen, the new headline feature here is Air Actions, that take shortcuts introduced in the Galaxy Note 9 to the next level. By pressing and holding the button the S Pen and moving around the stylus, you can trigger certain actions within apps.

For example, you can swipe up or down in the Camera app to switch the cameras; left or right to go to the next/ previous mode; or move the stylus clockwise/ counter-clockwise in a circle to zoom in/ out. All these actions can be customised on a per-app basis from Settings.

What’s more, Samsung will open the SDK to third-party developers, which means developers will be able to integrate this functionality into their own apps.

Samsung says it has also made it easier to select handwritten notes and convert them to text, as well as export them to a variety of formats like Microsoft Word, PDF, plain text, or image. You can also select handwritten text and change parts of its to a different colour or change the width of the pen stroke.

The unibody S Pen has a standby time of 10 hours. 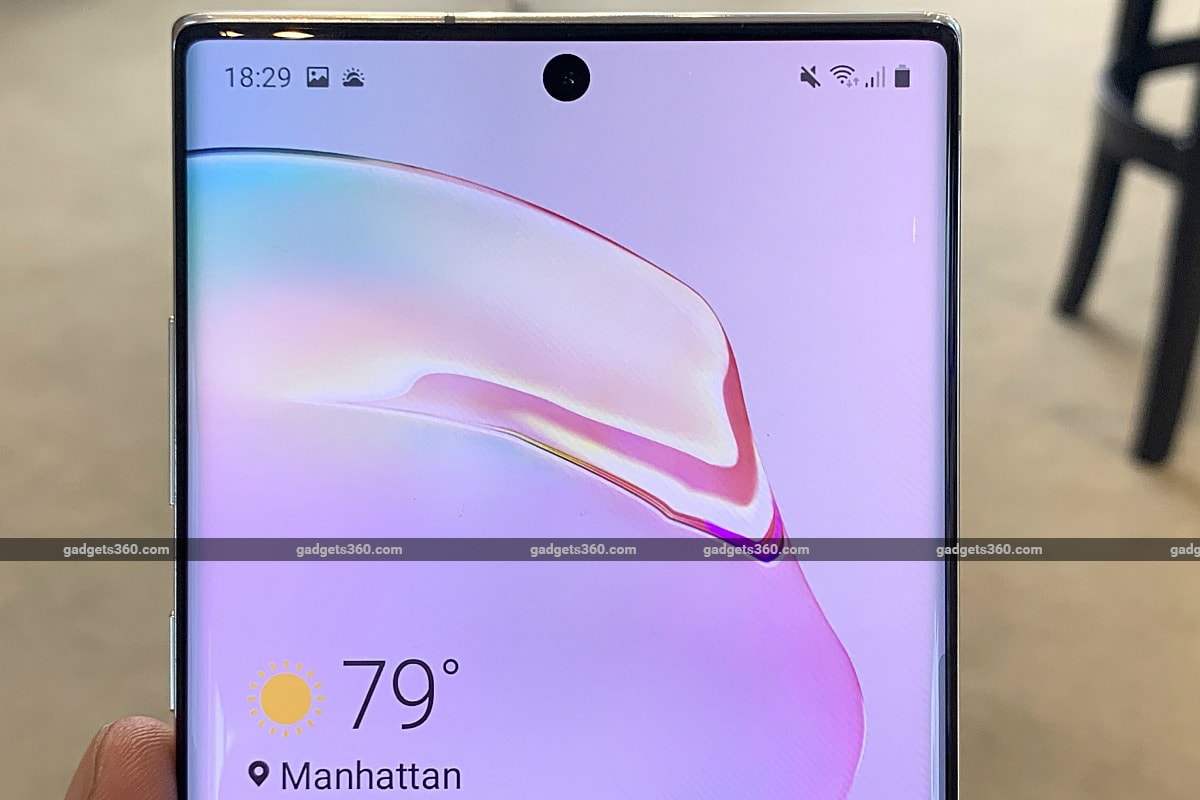 Samsung DeX, which offers you the big screen experience with your phone, now words with just the Type-C cable that comes in the box, letting you connect your Galaxy Note 10 and Galaxy Note 10+ to a Windows machine or a Mac and use the phone apps alongside the computer’s native apps. How this actually functions remains to be seen.

Windows users will be offered a deeper level of integration than ever before thanks to Quick Panel which gives the ability to share messages, see notifications, make phone calls, and view recent photos on the computer, as well as mirror the phone’s screen wirelessly. The phone calling feature will be enabled via a software update in Q4 this year.

The Samsung Galaxy Note 10+ comes with support for up to 45W fast charging, though both models ship with a 25W charger in the box. There’s a “AI-based Game Booster” feature as well that claims to enhance performance of compatible games, similar to what we’ve seen other OEMs ship on their devices.

Disclosure: Samsung sponsored the correspondent’s flights and hotel for the Note 10 launch event in New York.